Summing up my career in IT....

The most likely way for the world to be destroyed, most experts agree, is by accident. That's where we come in; we're computer professionals. We cause accidents. 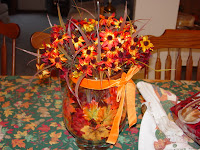 We had a wonderful Thanksgiving with great food and family fun at my sister's house. We are blessed! To see all the pics, please visit Flickr.
Posted by Webdebi at 2:40 PM No comments:

Where have I been? I've been hooked on watching Lakisha!

I never watched American Idol in the past. What little I know about it, I caught in commercials, on the news, in the paper, or around the water cooler. Well, that was BEFORE LAKISHA. I have been so hooked on watching Lakisha that my whole week has revolved around Tuesday and Wednesday nights. I can't tell you what a letdown Thursday nights are--boring!

Well, it all ended for me this Wednesday night--boo hoo! I cried my eyes out with Lakisha. What soul that girl has. What a trouper! Her voice was hoarse, but she carried on with it--singing her swan song "Stayin' Alive!"

I'm from the Flint area, so you can imagine what Lakisha has meant to us in this area. She's special and just because she didn't get the votes to stay on the show doesn't mean she's not a winner in our eyes...in my eyes. She has such a great attitude, that there is a higher power in all of this hoopla and things are meant to be the way they are.

Anyway, to the punch line. My coworker, Donna, and I were interviewed by Corey Williams, Associated Press, on Thursday at lunch in the University Pavilion. Here is a link to his article "LaKisha source of pride for Flint despite Idol exit"
http://www.examiner.com/a-720984~LaKisha_source_of_pride_for_Flint_despite_Idol_exit.html

My husband gave me heck for mentioning him during the interview (ahhh, life is good):

"I followed her every week," said Debi Rowden, 55, of Davison. "It was all about LaKisha. Her singing makes me cry. She was hope and faith for the Flint area. Even my husband was watching it."

Donna Jacobson, 44, of Flushing acknowledges it was tough the last three weeks.
"She's got a strong voice, but when she tries to hit the high, long notes she does yell," Jacobson said. "Whatever happens, she has to feel good about herself, especially being a single mom."

Well, if there was ever any doubt that I am going to any and all events in Flint to see Lakisha,

this is the final catalyst that will ensure that I will be there. I'm going to print out the article and try to get Lakisha to sign it and then I'm going to frame it and hang it in my office (at UM-Flint). My favorite Lakisha look was the "Diamonds are Forever" performance. Oooo-la-la! That was hot! Even though Simon thought the song and the look was too old for Lakisha, I loved it.

My favorite song was when Kisha sang "I Have Nothing". I am a Whitney Houston fan and I thought Lakisha looked beautiful again.

I thought Lakisha's personality shined through on the Bon Jovi song "This Ain't a Love Song". She looked awesome, her singing was straight from the heart, she seemed happy, and she laid one on Simon!

Well, as you can tell, I am pretty much a Lakisha fan. And it's not all because she's our hometown girl, Flint's Rose!
Posted by Webdebi at 6:39 PM No comments:

The Family Cleans Up Well! 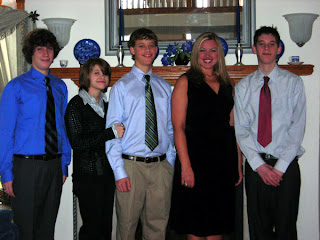 This picture was taken on Saturday, January 13, 2007, before we attended my niece Andria's wedding. Left to right: Will, Stephanie, Dave, Megan, Tyler.

Nobody will ever know what torture (of the damned) we went through to get the boys to wear ties. Actually, Megan went out that morning and bought them shirts and ties. She didn't like the shirts that **Dad** bought. What can I say--Megan has good taste!
Posted by Webdebi at 10:02 PM No comments:

So today we are spending the day cleaning up the last of the debris after the big meal. Megan and I cooked a 12.5# turkey breast with all the trimmings just for our family of seven. She made three desserts, pumpkin bars, a beautifully decorated chocolate bundt cake with raspberries, and chocolate cheesecake brownies. I baked one pumpkin pie. Megan made a beautiful centerpiece and bought matching tapers.

Will and Megan got up at 4:30 am this morning to go shopping. John left at 7:30 to go golfing. I woke up early, but stayed in bed for a few hours watching TV and cuddling with my cat, Angel, who loves to snuggle up to your legs. Too bad that Laura (of Luke & Laura fame) went back into her catatonic state. The reunion with Luke and her children was pretty touching while it lasted. I guess it was worth wasting time to watch.

Now it is on to the cleaning, decorating, shopping, baking for the Christmas holidays. Yippee!
Posted by Webdebi at 1:28 PM No comments:

Happy birthday, Cyndi!
Today is my sister's birthday. This is a picture of the Three Sisters volcanoes in Oregon. Our sister, Lori, lives in The Dalles, Oregon, so I think it's appropriate tribute to the three of us. Sisters forever!

Click on the picture for information about the Three Sisters Volcanoes.
Posted by Webdebi at 12:43 PM No comments:

Back to the Future

I'm back again. I have been switching between using Blogger and Mblog and now have decided to keep up this blog for my personal stuff--all work stuff is banned!

My friend, Sue, sent this link to amazing astronomical pics. Enjoy!
http://antwrp.gsfc.nasa.gov/apod/astropix.html
Posted by Webdebi at 9:34 PM No comments:

Webdebi
Mother of multiples - quads born in 1990. I am a graduate student in Education Technology at University of Michigan-Flint and am specializing in assistive technology. Plan to retire from working full time when the quads are finished with college which will free up time for teaching K-12 teachers to use assistive technology. I like to travel by train.